I'm still thinking about that article by Eva Wiseman about how her generation will never be able to afford to buy property and rents are too high. And I'm ploughing through the RightMove property website looking at rents in different London boroughs.

Here's a chart I put together 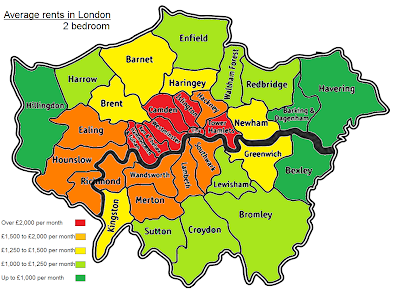 I spent most of my Bank Holiday Monday scraping the data to make that map, and then this morning found almost the same thing is on the charity Shelter's website here, apart from they're a bit presumptive, rather than labelling average rents they suppose that you need to earn about 2.5 times rent for it to be affordable. Which is where Eva Wiseman's figure of £67,669  to live in Tower Hamlets comes from. Its using a rule of thumb to come up with a very precise figure. How much of your income to spend on rent is a very personal choice, rather than something to be foised on you by a charity.

If you want to buy property and you're Eva Wiseman or one of her minimum wage call-centre friends then don't look at the most expensive places in London, look to the cheaper boroughs, the more affordable ones.

Its just a little small-minded to assume that all of the British Isles except the centre of london is uninhabitable.

Here's a table of rents culled from various searches on RightMove:-

To use this table, first work out how much your household can afford to spend on rent each month, between a third and a half of your monthly income, then look at which boroughs have properties at that price point.

I get the impression that Eva Wiseman is a stroppy middle class snob frustrated that she can't afford to live in stylish and expensive Kensington and Chelsea, stamping her foot crying "But I don't want to live in Havering!".

What I don't quite understand though is how the number of properties available in each borough decreases as average rents decrease. For example, Tower Hamlets, one of the more expensive areas to live has over 3,000 properties available, and Sutton, one of the cheaper areas has only 136. Its like the opposite of supply and demand.
Posted by Chris Gilmour at 02:15