In this blogpost I hope to provide evidence and data to show that the UK's top housebuilders as churning out houses as fast as they can, rather than holding back to preserve profit margins.

The UK's largest housebuilders in terms of completions, that is houses built in the years ending March 2016 and March 2017 are as follows:-


These figures are taken from the Annual Reports of each of the companies. The government's Department of Communities and Local Authorities records that the total number of home completions for 2016 was 139,840 and for 2017 it was approximately 153,000.

Therefore the top 20 largest housebuilders account for between 50% and 70% of all completions in the UK.

By looking at previous Annual Reports we can build up a picture of year on year performance, since 2004, including the 2008 credit crunch. 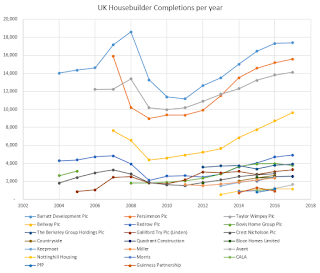 The data is sparser the further back we go because I am lazy and cannot spend so much time looking for historic company reports.


The year on year increase since 2008 is on average for all the companies 10% each year, however, there is some degree of bumpiness

From studying the Annual Reports we can estimate the cost of building a house. If the total revenue for a company is X and the operational profit is Y, then X minus Y is the total cost of all the labour and materials and equipment. This ignores any admin expenses, back office overheads and interest on loans. By dividing total costs by the number of completions, we get an approximate cost per house.

We can speculate that these companies aren't trying to get build as efficiently as possible because their profit margins will easily cover expenses, and so it would be possible to build houses by far cheaper means, but this is literally the majority of the market accounted for.
Posted by Chris Gilmour at 05:43 7 comments: 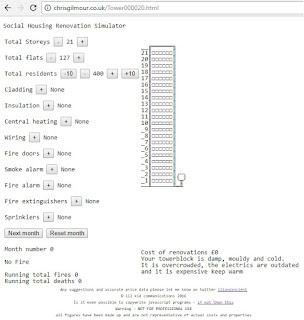 In the UK there was a big fire in a residential tower block which had been renovated only a year ago. Many people were asking why sprinkler systems hadn't been installed, or why flammable materials were used instead of more expensive flame resistant materials.

In order to understand how these decisions could be made, I thought I'd try to build a model or a simulator.

The first couple of versions just randomised the chance of a fire and how many people would die, based on known data. Then later iterations added the different renovations that could affect the chances. Then I added a nice uft-8 box drawing, because I'm old school, and feel that this art form has been neglected.

Anyhoo, it is here

I feel at this point it is stable and does what I kind of envisioned it to do. But my mind is boggling, new features bubbling to the surface. Whilst I accept that it is very crap, its no Sim City '86, neither is it as sophisticated as anything written this century and will probably never be.

However, further features would be as follows:-

Posted by Chris Gilmour at 03:09 No comments:

The Department of Culture, Media and Sport do not hold any information regarding browsing data of Karen Bradley, the Secretary of State for Culture, Media and Sport.
You may be asking why this is relevant, please allow an exposition...
A few years back in the wake of the 'Snooper's Charter' I put out a Freedom of Information request to get then Home Secretary's 'internet history' including internet telephony, browsing data and email meta data. This was knocked back as being too all encompassing. So I sent out another FOI for just the browsing data, and this was knocked back as being "a fishing trip" and "vexatious", which could be described as hypocritical, but was kind of accurate, I was trolling.
That Home Secretary then became Prime Minister, and a new Home Secretary, Amber Rudd was promoted, so I sent a new FOI, this time, I was less trollish, and requested the browser history for just one day to "gain a feel for the sort of websites that the Home Secretary visits during their day to day work".
Despite confirming that "the Home Office holds the information that you have requested" this request was knocked back because the browsing history was "personal information". This could be seen as progress from the Home Office, an awareness of people's concerns about privacy.
Still, Internet Service Providers have to keep their customer's "Internet History". You may be wondering in the context of Cabinet ministers, who their ISPs are. I wondered this too, and after the Health Secretary Jeremy Hunt suggested that ISPs could monitor bad language or something on the internet, I put in a FOI to find out who the Health Secretary's ISPs were.
As a private citizen he could have any ISP but for government work, the Department for Health is it's own ISP, and hosts a Departmental secured network.
So, the other month, it was announced that Karen Bradley, Culture Secretary, would be leading the government's Digital Strategy. To what extent does Karen Bradley understand and use the internet?
Her own MP website is out of date, saying that she is still a Home Office Minister, despite moving to the Department of Culture, Media and Sport in July last year, and her twitter feed is just supermarket opening and schoolkids smiling, rather an a genuine attempt to engage with people. I put in a FOI for her browser data for the day before the news about her Digital Strategy role.
The response was:-

I can confirm the Department does not hold any information in scope of your request.

Does that mean the Department doesn't have a Departmental network, or it does and it doesn't keep Internet History Records, or that Karen Bradley didn't use the Departmental History that day?
Posted by Chris Gilmour at 03:15 No comments: